How to deflect light after MIM structures?!

Hi
I’ve encountered a problem. I’ve a MIM structure and the output needs to be deflected. here is the picture :

Now I want to have a none linear medium (NLM) after metal structure to have the output light deflected there, just like this :

Could you provide a more detailed explanation of the functionality you need to obtain in the nonlinear medium?
Why do you need nonlinearity? From the last figure I can guess that it is a kind of non-diffracting behavior you are looking for. Am I right?

all I want is to deflect the output light after MIM structure. I found this paper : 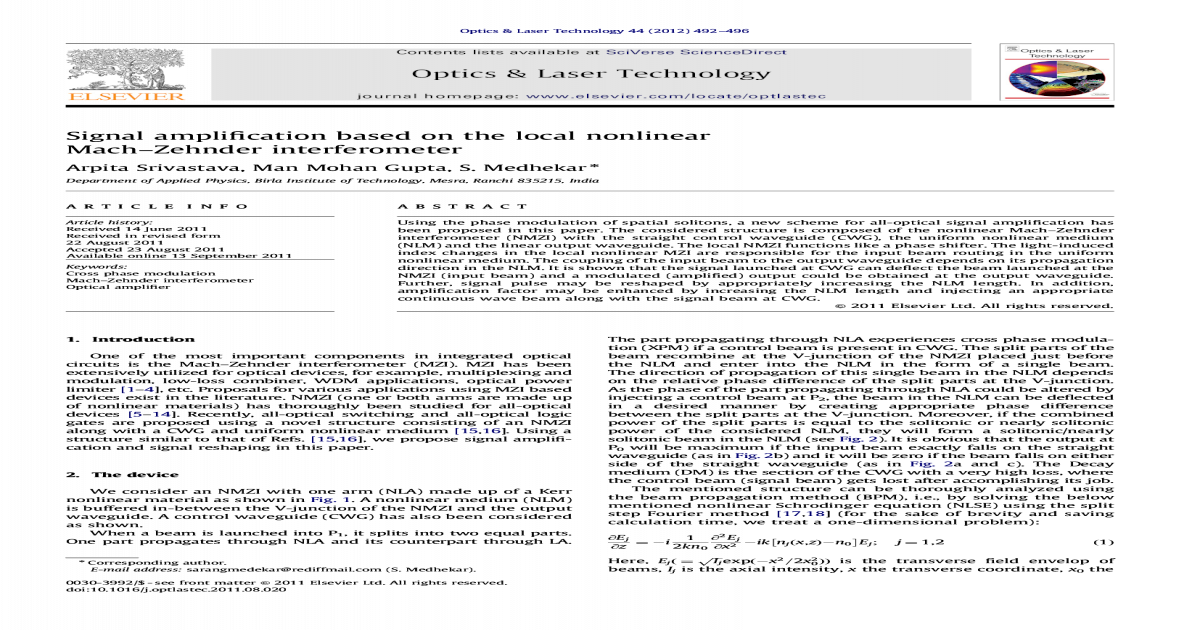 Signal amplification based on the local nonlinear MachZehnder interferometer


which explains how to deflect light based on creating appropriate phase difference in V-junction of mach-zehnder.
the question is that, the NLM area causes the deflection or the phase difference in V-junction?! And if I want to deflect output light in my MIM structure, what could I do?! Do I need an NLM area in output or …? Do I need nonlinearity!

There are two nonlinear elements here, which act independently one after another.
The first one is the nonlinear MZI, where the phase in one arm is varied by changing the pump power P_2. The cross-phase interaction (in a medium having cubic nonlinearity) is responsible for this functionality. To deflect the beam at the MZI output this is enough.

However, the authors wanted not only to deflect the beam, but also to prevent the ubiquitous diffraction spreading through leveraging the second nonlinear medium, placed right at the MZI output. By proper choice of the signal power, one can attain balance between the self-focusing nonlinear phenomenon and diffraction, so that they would balance each other and diffraction would be beaten.

In my view, the task is better to split into three stages. In the fist stage you model the phase, accrued in the course of the cross-phase interaction. Then, you solve for the field profile at the second Y-combiner, which is dependent on the phase difference found earlier. After that, given the field profile found, you propagate it in the second nonlinear medium.

@msaygin
yes you are right. the cross phase modulation is responsible for deflection in the nonlinear medium. Now this is optained in a regular mach-zender but my structure which is also a mach-zehnder is a MIM structure and therefor contains surface plasmons!
Does cross phase work in with SPP?! because as you know light travels on the surface of metal as SPP. now is it possible to optaind the same deflaction in the output as normal?!

@msaygin
Dear msaygin
I just wanted to know if it’s possible to deflect the output light in this structure?! ( whether by change in the input amplitude or other parameters):
3065_structure.fsp (255.0 KB)

The general answer is yes, if there is the proper cubic nonlinearity and its strength (nonlinearity multiplied by pump field intensity and the spatial overlap are calculated) high enough to yield a phase shift of pi, given the MZI dimensions.

I will look through your script on Saturday and be more specific on your question, when I’ll have access to the laptop.

I’ve looked your script. Of course, the structure as it is now is far from optimum.
In your place, I would do the following:

Please, share you following lumerical scripts and estimations as it is ready.

© Copyright 2003-2020 Lumerical Inc. | Privacy | Terms of Service | Site Map
We use cookies to make interactions with our websites and services easy and meaningful, to better understand how they are used and to tailor our marketing efforts. You can read more about our Privacy Policy and your cookie choices here. By continuing to use this site you are giving us your consent to do this.